Good day guys and gals, I have quite the large update for you this week. For this update I will unveil the home screen for the game Guardians Guide as well as the first in-game illustration of the daughter. This unveil will also be in the video and monthly update I will be releasing next week. Also, I will discuss everything I’ve been doing for the past week as usual. Let’s get started!

First, here’s the screenshot of the home screen. 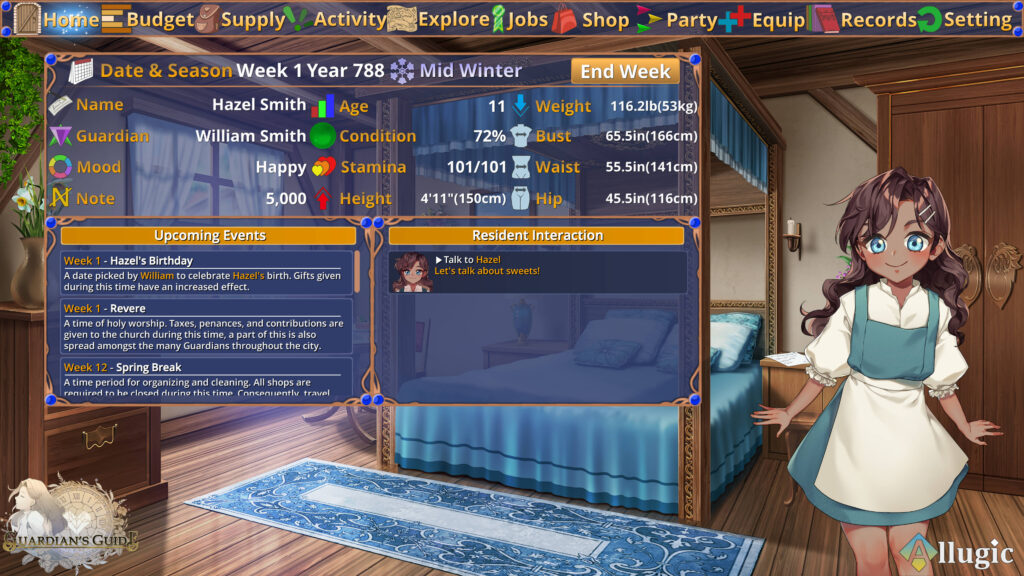 The home screen is the default screen for the game. It has most of the information pertaining to the current state of your daughter.

Most of everything you see in this screenshot is functional more or less, but the overall game is a work in progress so things are still subject to change. Today we will only be discussing the home screen, I will unveil more information about the different menu items at the top of the screen at a later date.

You will be able to create both the first and the last name of your character. You will only set your daughter’s first name and she will take your last name. I am considering giving you the option to decide if you want your daughter to call you by your first name or with the title of mom or dad. What do you think?

There are several moods your daughter will experience throughout the game. These mood changes are affected by a number of things in the game. It could be the food she eats, maybe something you say to her, maybe something that happened to her while she was out of the home, or maybe she just wakes up on the wrong side of the bed. The mood changes directly affect job conditions.

This is the currency denomination in the game.

The condition is a representation of her health. If her health gets too bad then she won’t be able to work or leave the house. Average health is around 55%, and her peak condition never goes above 99%. Once her health starts to get below around 30% is when she starts to get sick. Condition is affected by the food she eats, the work she does, the amount of exploration she does, and the budget you decide to use each week.

Stamina is predominantly used for completing jobs and exploring the world. Once you run out of stamina the only way to replenish it is to start a new week.

These stats are self-explanatory, they go up as she gets older. Depending on the food she eats some of these stats might increase or decrease slightly. I’m considering adjusting her character models if, for example, her waist increase is more than average. The change would be small and I don’t know if the player would even notice but it would be a fun detail. I could even make it really exaggerated just for comedic purposes.

This is a list of events happening throughout the city on a week-by-week basis. Most of the events are optional, but a few will be mandatory and some will be added on at a later date in the game. If you noticed in the screenshot the first event is her birthday. You can actually choose her birthday in the beginning of the game. She doesn’t remember her birthday since she spent most of her life as an orphan. It doesn’t matter what week you choose but she will most likely request something on her birthday. The good thing about this is whatever she requests or whatever you give her will have a boosted effect.

This is where you directly interact with those who are currently in your home. Here you can discuss things that might have happened recently with your daughter, you can also ask her questions, or just tell her how you really feel. People who visit your home will also show up here. You can talk to them the same way, or not. Some interactions will be optional, some will be mandatory.

This button will end the week after all the required material is completed.

That is the bulk of the home screen. Do not worry folks, there is a lot more information in this game than what’s on the home screen.  But there is one last thing I want to show you, here is the animation of the 11 year old daughter illustration in the screenshot.

(Please note, this is an early version of the animation, check the video from the 2nd monthly update here to the see improved animation)

Okay, enough about that, I will discuss the home screen again in the next monthly update with a video. It’s time to discuss what I’ve actually done this week besides the home screen. 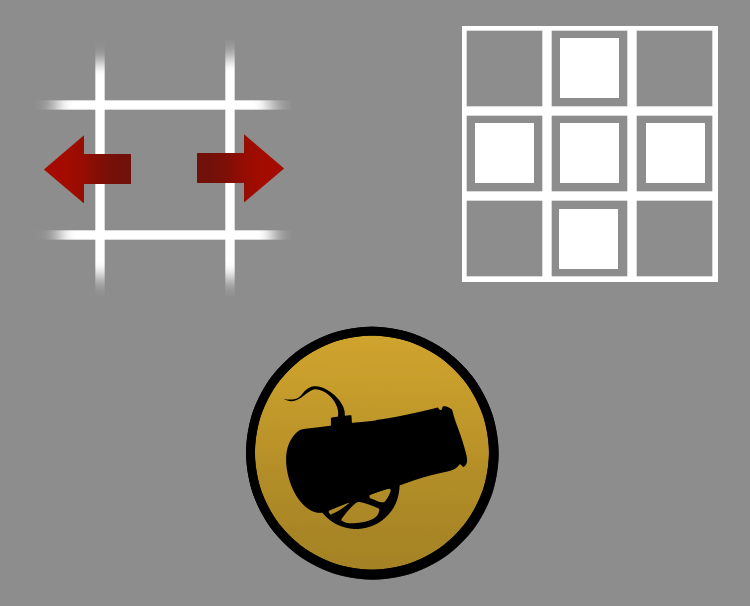 I won’t explain what they do but when I unveil the battle system they will make a lot more sense.

As for next week, I will focus on putting together the video, and work directly towards a functional beginning of the game. The state the game’s in now can best be described as functional but disjointed. There is a lot of garbage and old material bloat throughout the project. I’ve added, changed and revised hundreds of different objects over the years, so I need to take some time and reorganize the whole project to make it easier to properly build the game on top.

Welp, that’s all for this week. Until the next update, stay well my friends.