Hello folks, time for another weekly update. This week has been pretty productive, I’ve managed to get quite a bit of work done for the introduction of the game. I will show you a bit of that and I will present an overview of what’s to come in the next monthly update. Let’s get started.

In the last update I showed you the title screen. When you start a new game you are greeted with a bit of exposition and you are asked to enter some information. 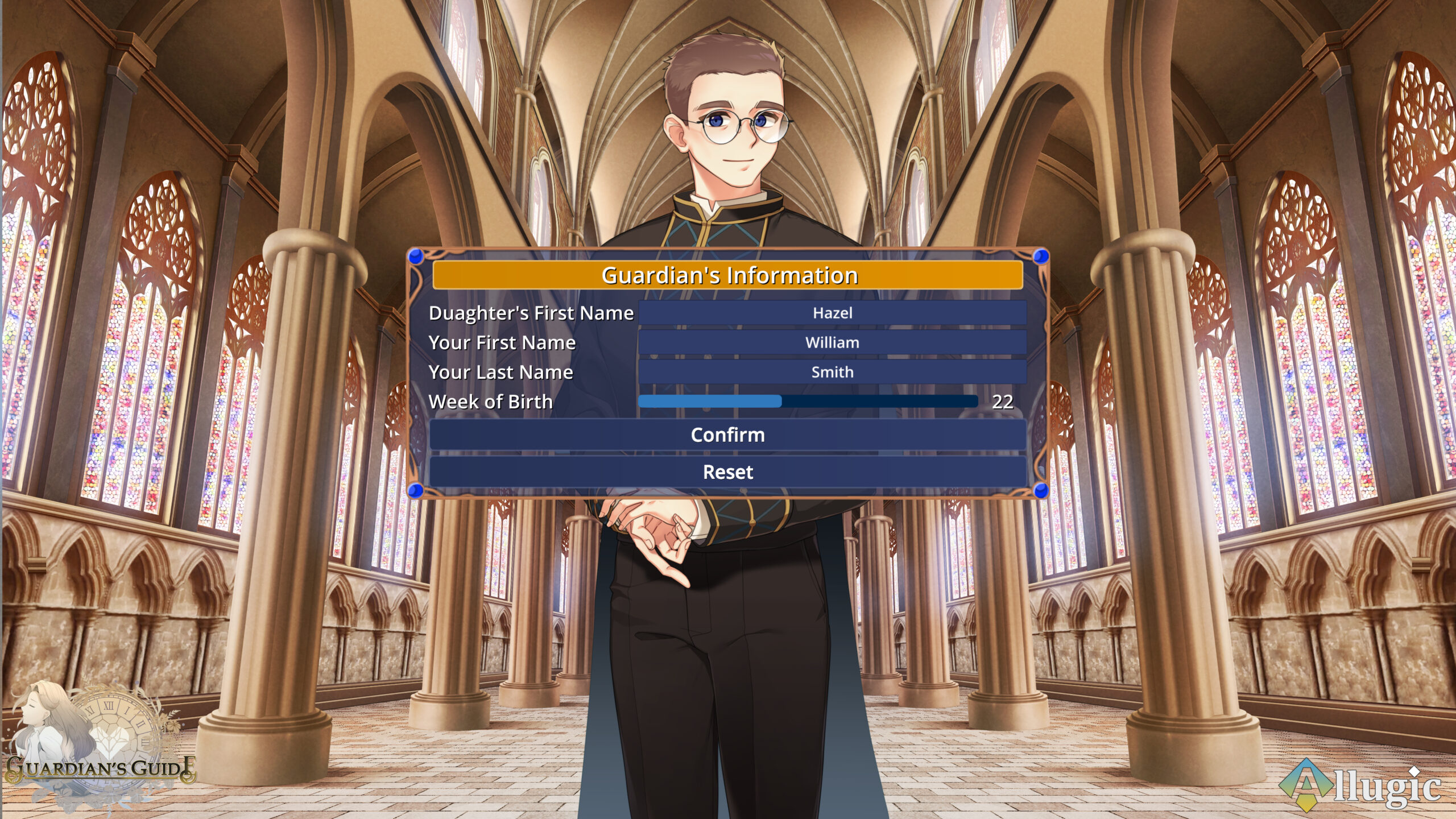 For the introduction of the game you are guided by Julius, he is the one I mentioned a few updates ago. This introduction is planned to touch on quite a few things. This includes the budget system(as seen below), the different jobs in the game, the battle system, and the exploration. As of right now I’ve covered the budget system and I’m in the middle of covering the jobs. The battle system and the exploration are partly complete but will require a lot of time investment to polish before showing them to the public.

Next week I will finish covering the jobs and dive directly into exploration and battle.

Now, the next big topic for the video and monthly update will be the budget screen. As I mentioned above, the introduction goes over the budget system, this is the screenshot below. 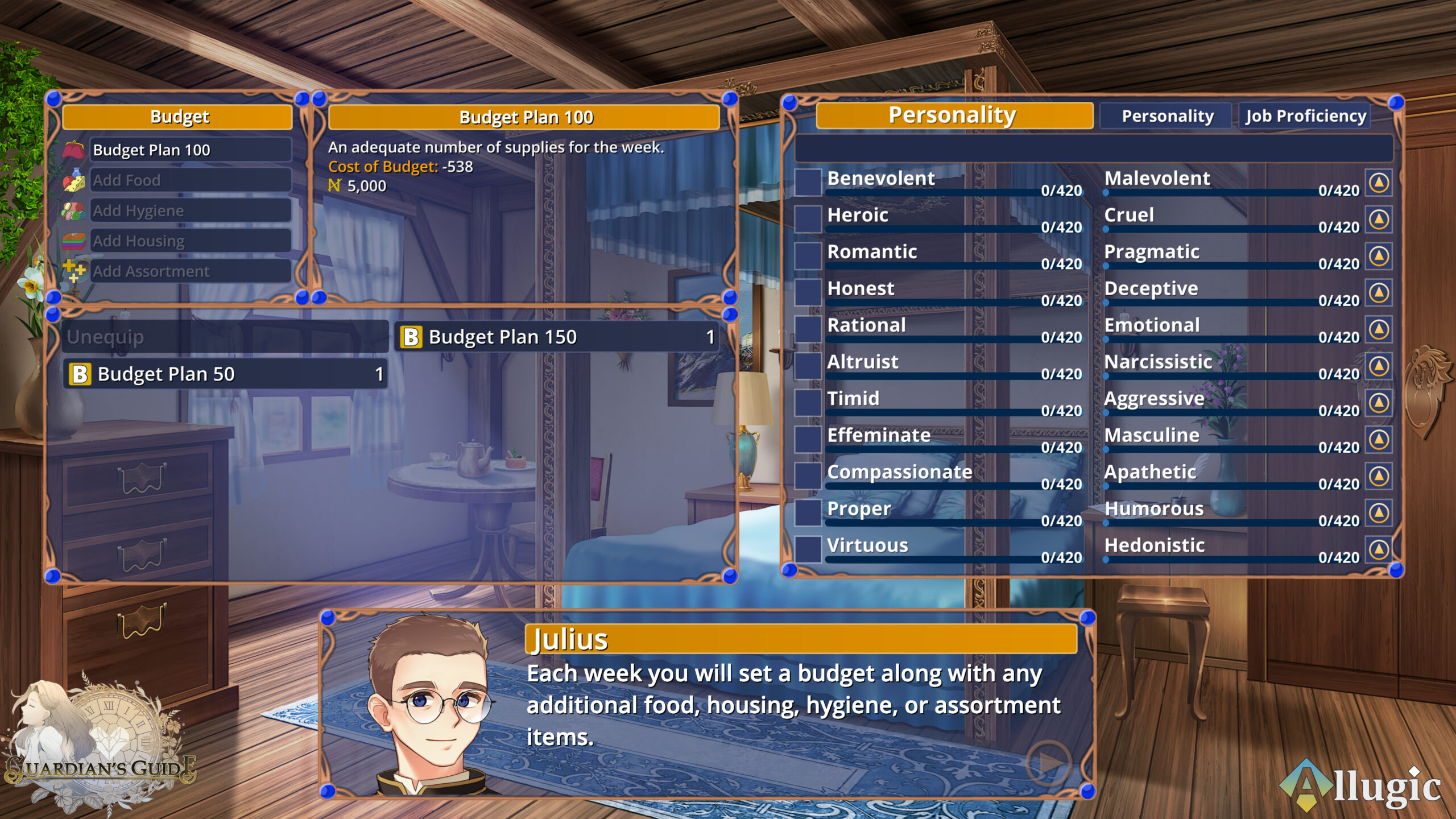 The default budget is Budget Plan 100. Any deviation from this will multiply the cost of the budget. For example, Budget Plan 50 is half the price of Budget Plan 100. Likewise, Budget Plan 150 is 1.5x the price of Budget Plan 100. These are just the introductory plans, there will be more budget options such as plan 200 and plan 0. The variation is meant to give you options to improve her condition and mood. Essentially, the more you spend in budget the higher her condition could be for the week. Or it could improve her mood if she’s in a bad one from the previous week. The downside being you will be losing a lot of money in a single week. The opposite is also true, lowering the budget to 50 or 0  could result in lowering the condition or creating a bad mood. But sometimes you might need to save money so lowering the budget might be helpful in the long run.

Adding hygiene products equally affects her mood and condition. To put it simply, the higher-quality the products you use, the better it will affect her.

Assortments work like a wild card. You can add either food, hygiene or housing products into assortment. There are also specialized items that can only be placed into assortments.

The food, hygiene, and housing products have what is called a shelf life. After a fixed number of weeks the products become useless and you can no longer use them. Food has the shortest shelf life, they are consumed in a single week if used, but generally only last between 1 and 3 weeks if not used. Hygiene products will last between 1 weeks to 8+ weeks. (depends on the quality) Housing products have the longest shelf life but have a tendency to break if used consistently. Both Hygiene and housing have their shelf life consumption doubled when in use.

If a product becomes useless you will be able to sell it to get at least half back of what you paid, so it won’t be a complete loss. But you should be cautious of what you buy to not waste your money.

Next I want to discuss the information you see on the right of the screenshot above. This screen controls the personality of your daughter. It’s a pretty simple and straightforward approach. You just set the attributes you want to develop and each week it goes up by a fixed amount.

As your daughter grows the personality traits begin to reveal themselves with each new situation she’s in. For example, If you’re in a situation that involves saving your life or helping another, you might get a unique menu option that will only show up if you put points into “altruist” or “narcissist”. Likewise, your daughter will begin to say things on her own purely based on the personality traits you foster.

Finally, towards the end of the game if you manage to get her personality traits high-enough she might gain a unique appearance. (well, that’s the plan)

The last option there just showcases the job proficiency. The longer you work a job the higher the proficiency increases. I will go into more detail when I start showcasing all the jobs.

That’s all for this update, next week I will have the next monthly update and a video prepared for you guys. Until then, stay well. 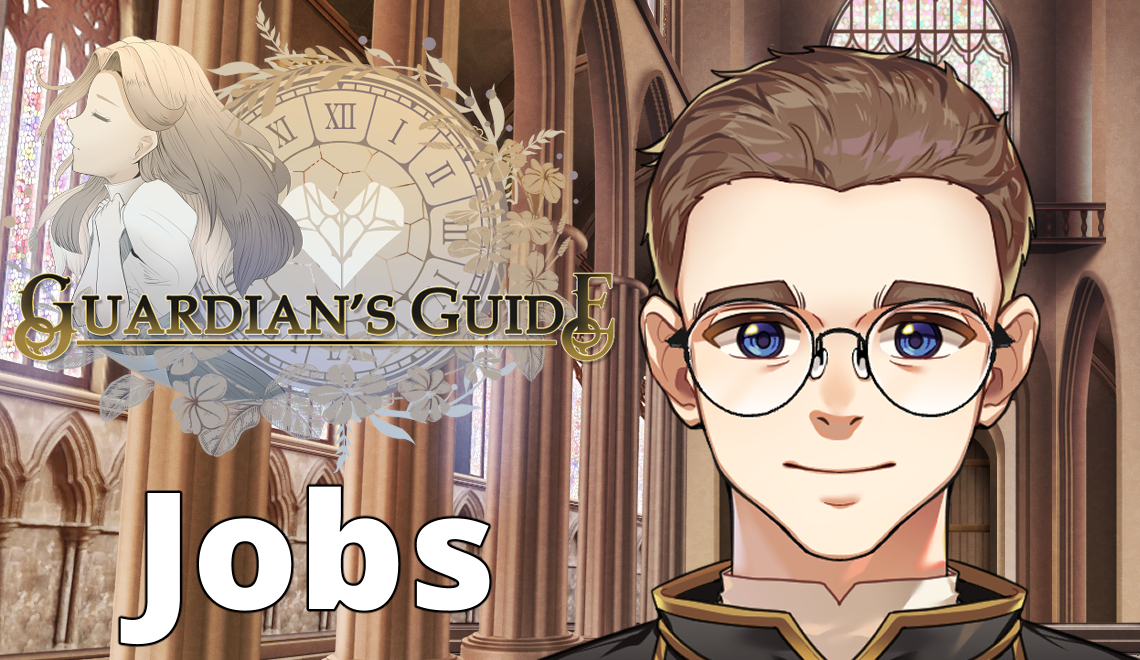 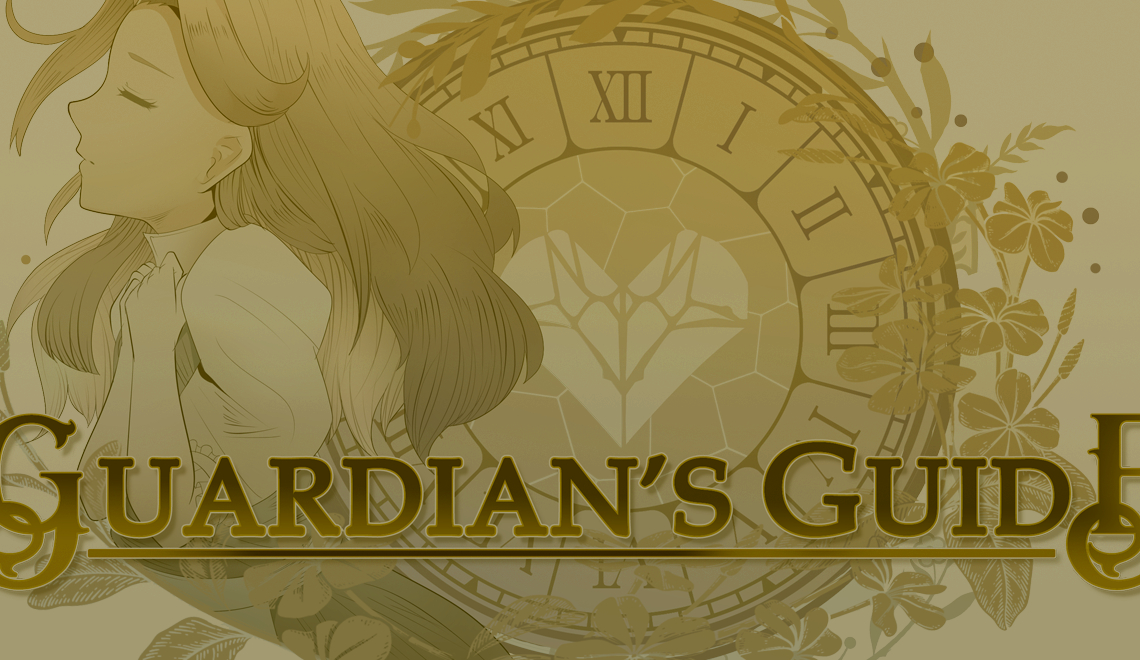