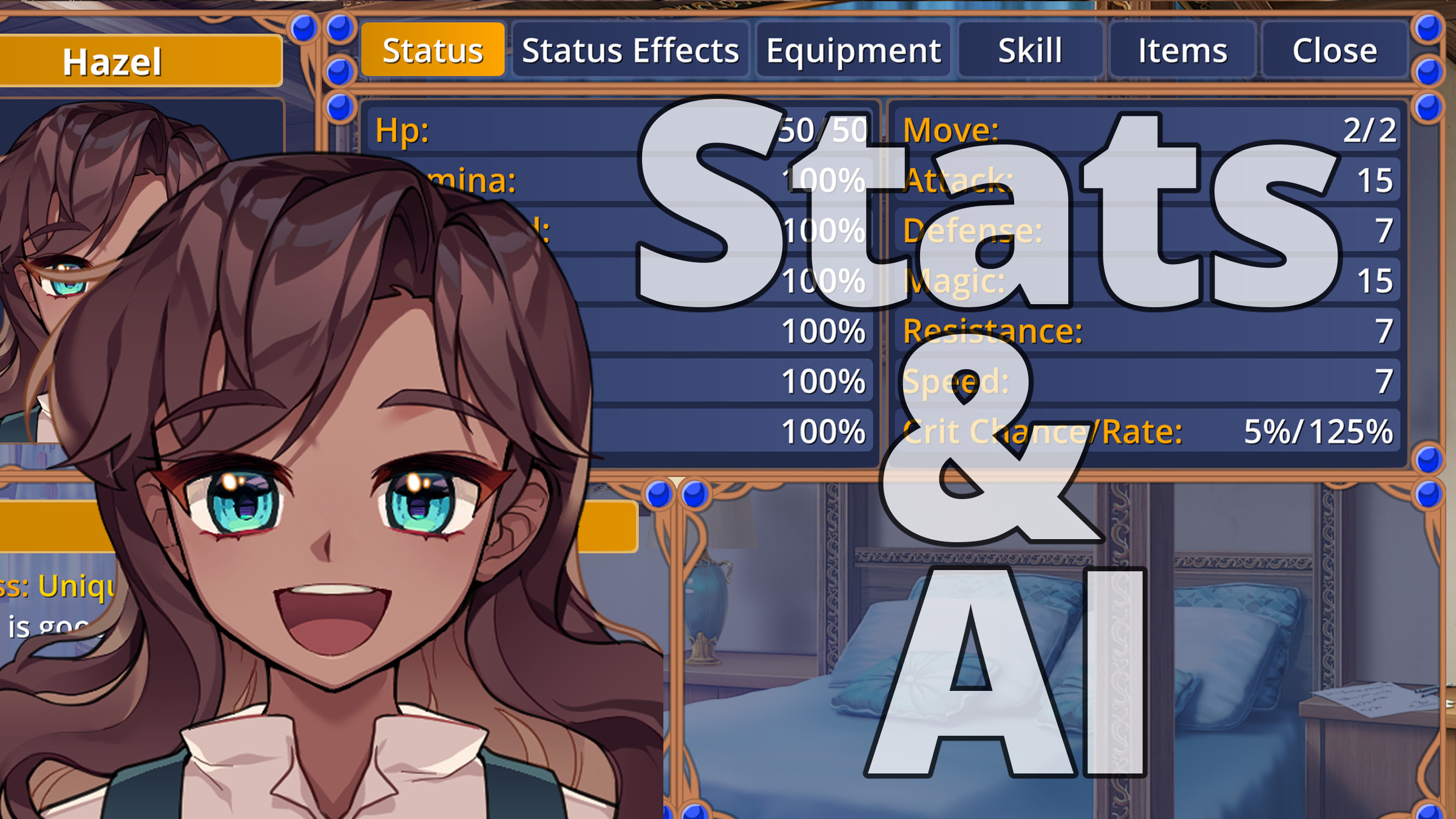 Hey, hi, how are ya? Time for another update.

I’ve been moving at a moderate pace. I’ve mainly been focusing on the battle system. I finally got to a point where I can test the battle outcome based on the stats I set. Long story short, it wasn’t looking too good. I’d been considering making some changes to the stats and I finally decided to implement those changes.

Originally the stats worked like this: (Stat 1: Attack Min ~ Stat 2: Attack Max) = (Random Attack Value) This looked nice on paper when I originally came up with it and I had ideas of utilizing the min and max damage with items and skills. I also had hidden stats that were meant for internal equation operations. As I looked over the data, I realized all of it was just unnecessary overhead and didn’t really fit into how the game is going to play in the long run.

So I decided to simplify the stats. The hidden stats are gone, they weren’t needed in the first place to be honest. The min and max stats have been simplified to a single stat, on the front end. On the back end they still function the same, but they work on a unified +15%/-15% random multiplier in the battle equation. This gives me a much more predicable damage outcome plus I no longer have to deal with a bunch of bloated stat data. Feels good, man. 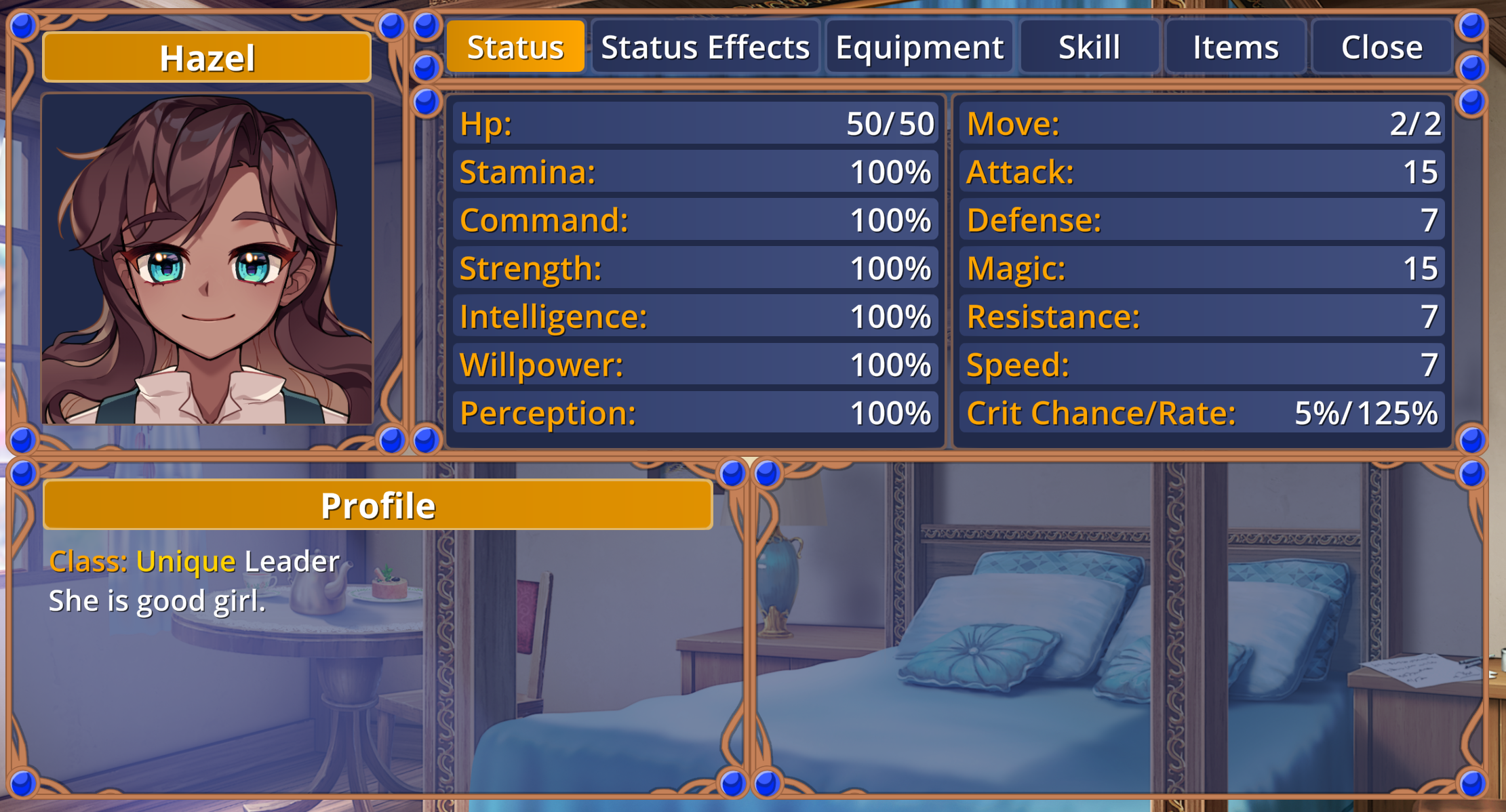 Side note, I finally updated the main daughters portrait and made some fine adjustments so the colors match better with her older portraits.

I’ve also made some changes to the GUI of status effects in the status menu. I wanted all the important information to be more clear and easy to understand. I will continue to make adjustments as I feel will be beneficial to the player! 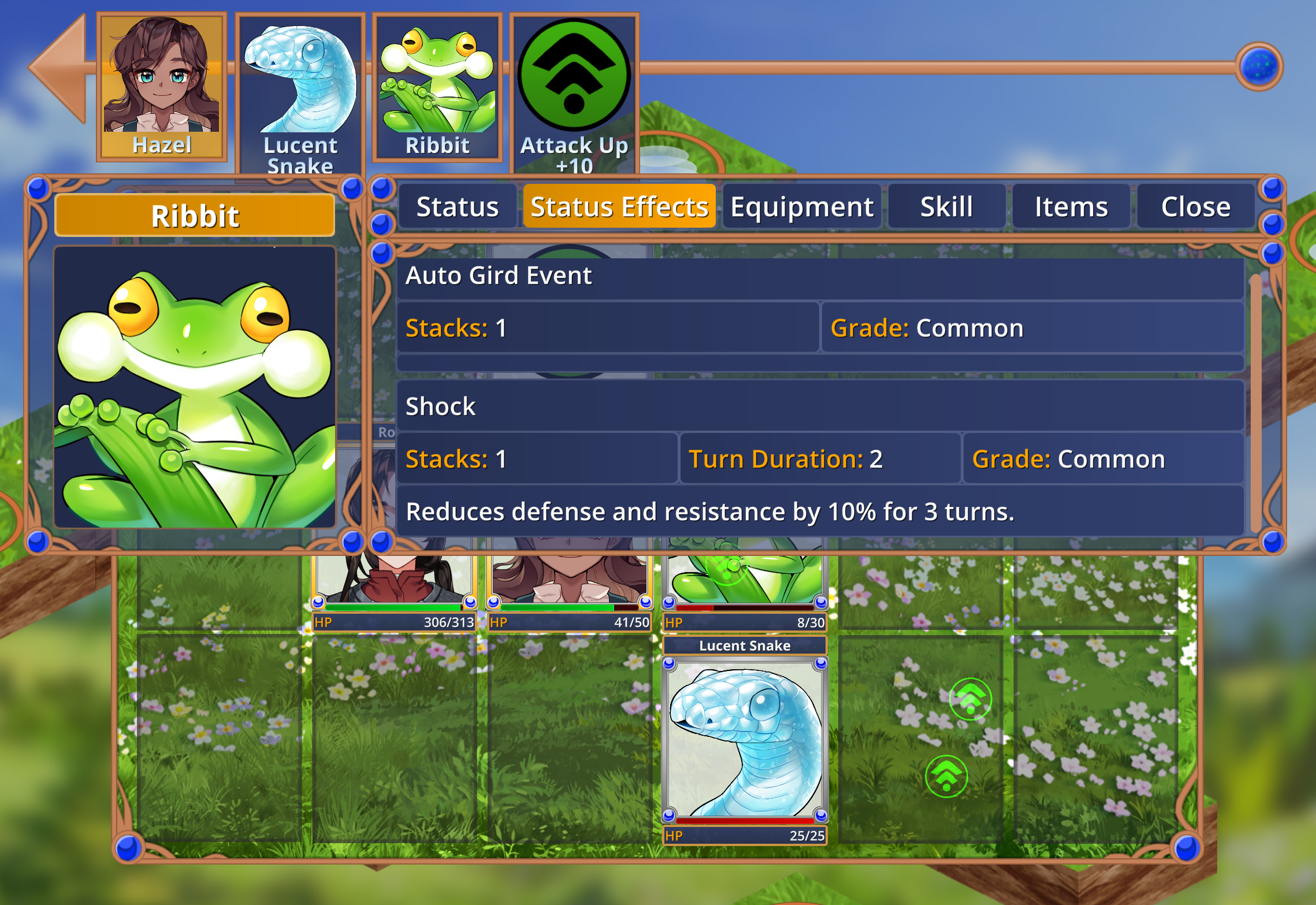 An important aspect of RPGs and Guardian’s Guide in general is the AI. This is the one thing I’ve been spending a lot of time on in the past week. Something like: Attack the target with the lowest Hp unfortunately isn’t supported out of the box. It took quite a bit of brain power for me to come up with solutions to these AI problems, but I’m finding them.

My goal is for the AI to be slightly more smarter than the player expects. I have a list of priorities the AI follows. With it’s own life being number 1. But it would be way too hard if the AI could easily cure itself as it’s HP gets too low, so I have to set restrictions so the player always has a chance. For example, no monster will ever cure itself with a cure skill. There will be monsters that cure others with a skill and there will be monsters with a fix numbers of cure items but they will never be able to cure themselves endlessly.

This is my goal for the AI. This is what I want to be the basis for the average battle. Boss battles, special battles and unique events will have their own set of rules and AI interaction. A lot of this is just me learning how to effectively utilize the framework.

Even at this state, the project is beginning to feel like a productive game. I almost died testing some things when it was 1 vs 2. (the stat changes made a good impact) Of course, I’ve been running into hickups. I’m in the middle of one right now. They are never ending, but I am getting closer and closer to the release of the next major update.

The things I have left to do are, make all the battles I plan to show fully functional without any weird bugs, complete the exploration map event so it’s also fully functional, redo the quest leading into and exiting the map event. Once that’s all done and looking good, I’ll make the video for the next major update.

After all that’s complete, it’s time to tackle all the smaller stuff I’ve been ignoring for months. The actual daughter raising portion of the game. I need to go back and make sure everything works and I need to make some changes to the mood/emotion system to make the experience more dynamic. I still haven’t come up with a solution but that’s a problem for later.

Well, that’s it. I wrote a lot in this update, it’s just an accumulation of what’s been going on in the off weeks of no update. I’ll talk to you guys again next time!