Another week, another update. For this post I’ll give you a simple update of what I’ve been doing for the past week. I had to move work locations last week so I spent some time adjusting but I still got a bit of work done.

I spent most of the week working toward completing the intro. I’ve fully set up the job system so it’s modular from now into the end of the game. What that means is I can input custom events, dated events or let the game use the default events at any time in the game. That is, as long as I follow the format I set up. (no problemo)

Next, I made sure everything connected from start to finish. All the variables, status values and text had to be correct for each job type. This took some time, but luckily I only needed to set it up once. Once the job system worked as expected, I was finally able to move on to exploring and battle.

But before that, I created a Resident Interaction to connect the job tutor event to the exploration tutor event. Originally the R.I. was just a fixed button. It was static so I didn’t need to worry about it taking up a lot of resources. But unfortunately, I ran into a problem. I needed the portrait on the R.I. to be dynamic since the daughter’s portrait will actually change over the course of the game. I solved this problem by making the R.I.s items like the Upcoming Events. This will create more resources but it gives me the most freedom.

At this point I’ve gotten a bit deep into the game, I think at least 10 to 15 minutes of real game content. (mostly text) Since I test this game at minimum 30 times a day, I need to skip the stuff that’s completed. I can skip most of the content by moving some stuff around on the back end but I really don’t want to do that every time I need to get somewhere. So I decided to utilize the save/load system for the first time. Everything worked as expected with the exception of the things that don’t get saved. (like images, game objects, object positions and abstract concepts) By abstract concepts I mean, for example, if the game is located at home or exploring a map. I can solve this using things like bools but I still have work to do there, and it will require my attention throughout the game making process. (more stuff to worry about lol)

Lastly, as I was thinking about the explore system and stamina as a stat, I realized this might cause confusion. Ok, a little information unveil, stamina is used for increasing the max HP of a user. 150 stamina = 150% increase in HP. Stamina is also used for jobs and exploring. A job consumes 50% of the base stamina each week. That is, 50% without any added bonus.(equipment, items, etc) Exploring a map consumes stamina as well. Unfortunately, as the stamina gets consumed the player may believe he is losing HP. Not my intention! So I decided to change the name of the value that is used for jobs and exploring. It is now called Vitality. 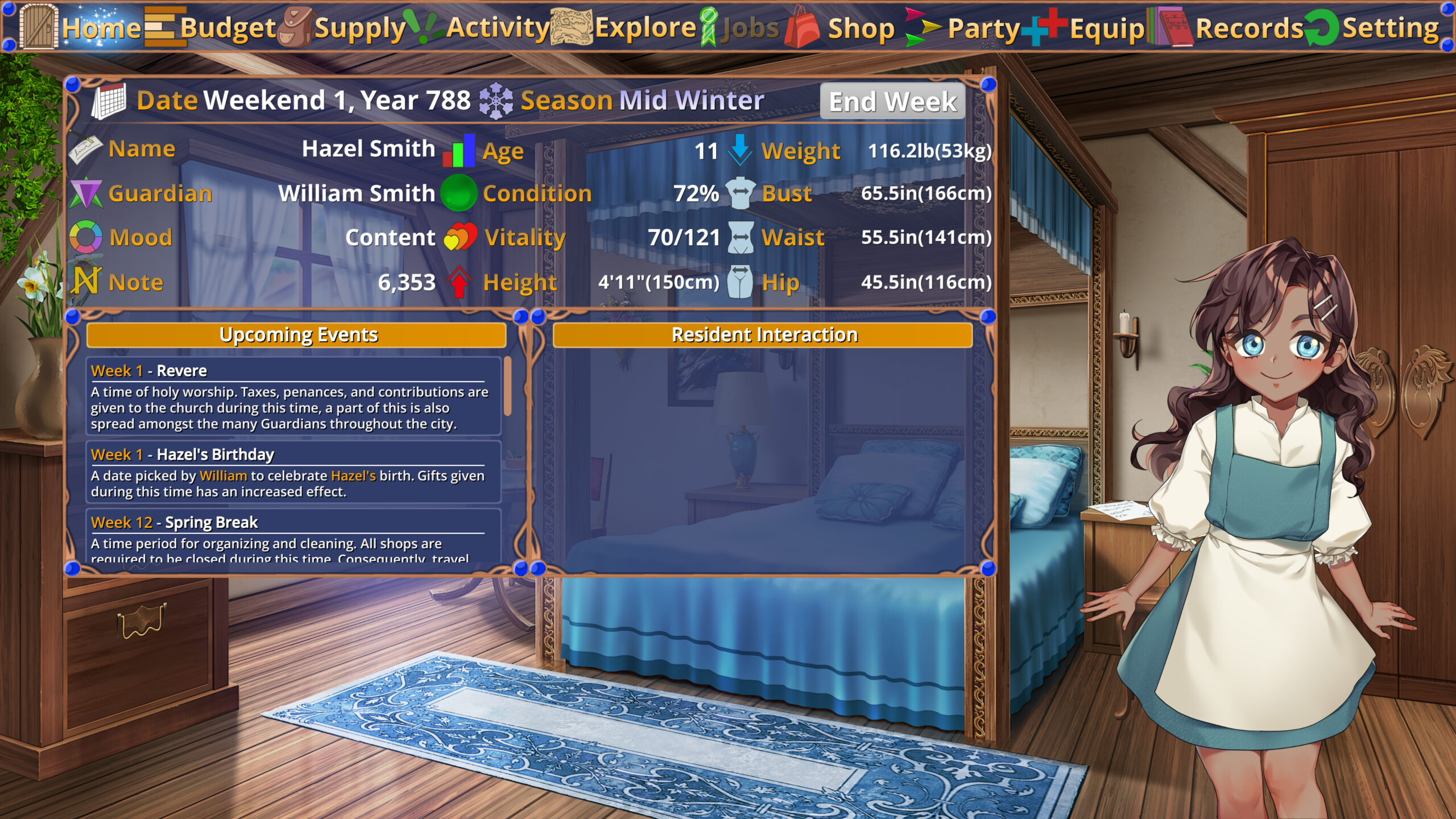 It works the same way as before but just with a different name to not confuse the player. The max Vitality is still based on Stamina. So the more Stamina you have, the more Vitality you can have for jobs and exploring each week.

Next week I will begin the exploring and battle tutor. A lot of work to do there but I’m excited to get those areas fully functional so I can finally show it off. RAAAAAAAA let do this, game completion LET FUCKIN’ GOOOOOOOOO.